The Bamboos to Spear Creek to Carradoo Tanks Gravel Pit

We travelled 235 Kms from the Bamboos campsite to Spear Creek via Port Pirie, driving up the West Coast of the Yorke Peninsula via Moonta, Wallaroo, Port Broughton, Port Pirie then joined the Princes A1 Highway. Always looking for the road less travelled, we turned right onto Nectar Brook Road, and travelled, mainly slowly on a narrow dirt road for a while. Then right onto Horrocks Pass Road briefly, then left into Spear Creek Road and finally onto Boully Road before arriving at the park. It’s an off beat and slightly longer way to get there, but you pass through scenic country, mainly low saltbush, sheep crossing the road and the odd roo or two!

Spear Creek Caravan Park is in the middle of a 7000ha working sheep station in the District Council of Woolundunga on the foothills of the Flinders Ranges where you camp amongst beautiful old river red and white gum trees. The hosts Bill and Karen were most welcoming, but are leaving mid May after having managed the park for three years. Before that they had started their trip around Australia and only got as far as the park, loved it so much they stayed and ran it.

Spear Creek Caravan Park has everything you need

There’s a washing machine, showers, toilets, Hills Hoist clothes line and kitchen with all the usual amenities to cook in and an adjoining undercover, open area with tables to sit and eat at. Water is available with an artesian bore supplying the property. The quality has been tested and approved by SA Water for drinking and it is so clear and tastes great. We took the opportunity to top up our water tanks. All this for only $25 a night. But don’t come here when it’s school holidays or Easter. Apparently the park gets chockers with around 300 people! There were only about three others campers the night we were there, but it was a Sunday night.

Being located on a working sheep farm, they sell lamb at the office from their saltbush fed Dorper sheep. Not sure if that makes them taste better but it sounds good. We didn’t try any as we still had a full fridge and freezer and couldn’t pack anymore in. So don’t turn up with lots of meat so you can enjoy it straight from the farm.

But where are the stromatolites?

Apparently, 300 million year old stromatolites have been discovered only 1.5Km from the park office, on a walk that will take you through magnificent valleys and gorges with wildlife like wedge-tailed eagles, goats and kangaroos. We decided to do the walk the next morning, leaving early to try and find the stromatolites using the mud map supplied from the office that would have had Indiana Jones scratching his head. Despite coming across some potential stromatolite looking rocks we returned to camp slightly disappointed we didn’t find anything impressive. But we were very energised and awestruck by the beautiful walk and scenery amongst the river red and white gum trees, and spotting a few kangaroos.

We only spent one night there, but would have stayed longer, if not for wanting to be in Cook by Thursday so we headed west to the Nullarbor.

At Port Augusta we stopped briefly, buying groceries and refuelled. Through Facebook, we found that one of our friends, Whippet was on his way back from working in Venus Bay so we met him just west of Port Augusta near the golf course. We hadn’t seen each other for a while so it was good to catch up. Our last big 4WD camping trip together was Lake Eyre in 2011. There’s an old blog of this trip with not much commentary, but a lot of photos here. Plus the 12 days of Christmas that Vic wrote for our best friend Kylie, who sadly lost her battle with cancer in April 2017. Kylie was a dear friend of ours and together with her husband Mark, we went 4wd’ing and camping as much as we could. Her passing was a big factor in us making the decision to start a new lifestyle of living on the road. Life is too short not to do the things you want to do. We don’t want to leave things too late and have regrets.

About 150 Kms from Spear Creek, about 30 Km east of Kimba we stopped at a roadside rest stop called Carradoo Tanks Gravel Pit in Lake Gilles Conservation Reserve, which rated 4 stars in WikiCamps. There are lots of sheltered parks amongst stringy bark gum trees on red dirt to tuck in away for the night and escape the wind. Plus there is ample room for large RV’s to park as well. Road noise was minimal as there are tracks leading way off the road. There were no flies and only some ants seen when you drop water. They were thirsty, but not a problem. No facilities, just great free camping, clean and fresh air! Only one other small Campervan parked overnight in the distance. There was a slight breeze, but it was a clear night and the stars were incredible!

Morning was a bit brisk with a slight breeze, but with brilliant blue skies. Using the portable gas cooker, the gas cylinder was freezing up so it must have been cold!

We were unsure of which direction to head from here, but wanted to be in Cook by Thursday night to watch the Indian Pacific train come through on Friday. Perhaps towards Venus Bay where we used to go camping in our 20’s? But looking at the weather, it was going to be windy there with 40 Km winds predicted on the coast. So we decided to continue along the Eyre Highway…continued on next blog. 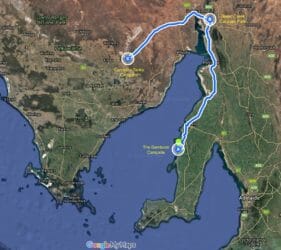 The Bamboos to Carradoo Tanks, 385 Kms 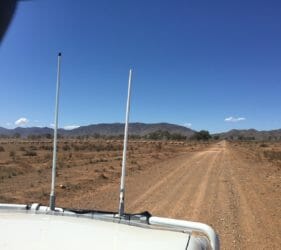 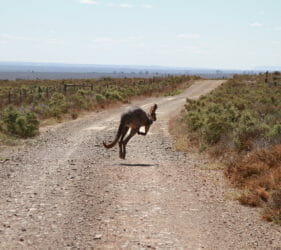 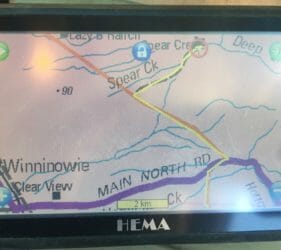 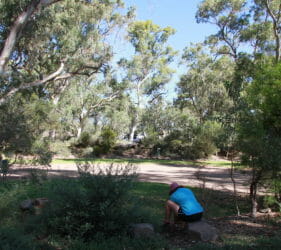 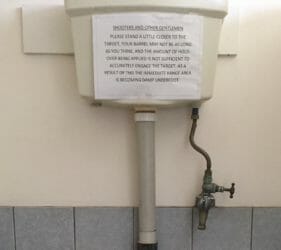 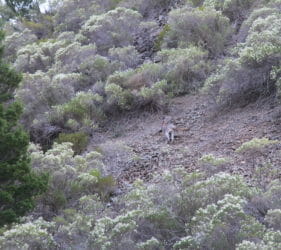 Roo in gorge in Spear Creek 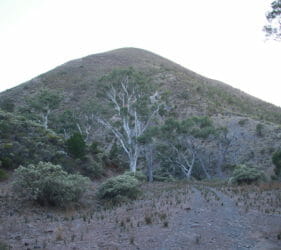 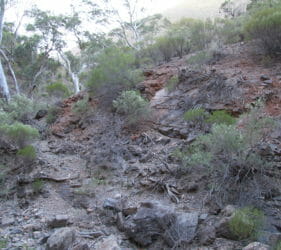 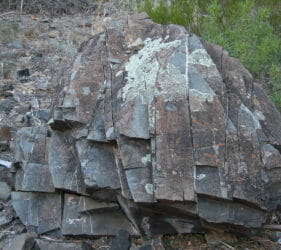 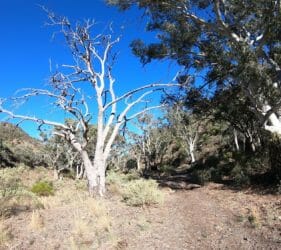 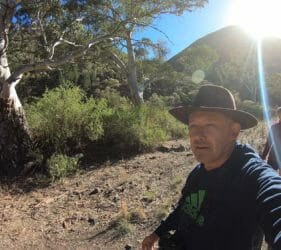 Vic and Leonie walking through the gorge in Spear Creek 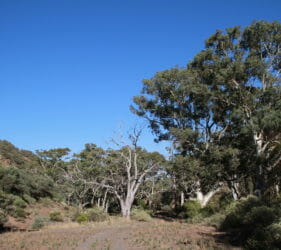 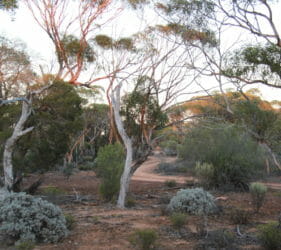 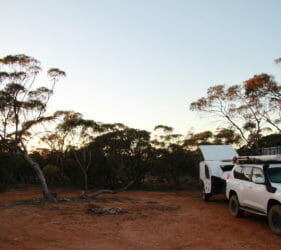 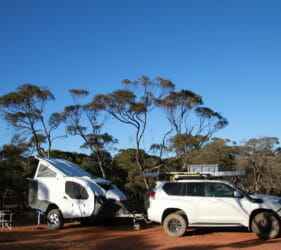