We finally left Gumeracha at the end of February and headed west which was our intended direction when we arrived in Gum at the end of November. In the last few days leading up to our departure we had to decide what to take and what to leave again, but no where near the scale when we left Bendigo. But knowing you’re going to be on the road for who knows how many years makes you want to pack everything to cater for all seasons, but you can’t, so you need to strike a balance. We still don’t think we’ve got the balance right yet. Time will tell.

It wasn’t until very late in the afternoon on the last day in February, about 6pm that we had finished packing and saying last goodbyes to family. We probably should have stayed another night, but after all the packing and anticipation of heading off again, we were keen to get on the road and thought we’d stay at a roadside stop somewhere a couple of hours away.

On the road again

Vic had a random thought over lunch a few weeks before we left that he’d like to visit a small town called Cook when we cross the Nullarbor and see the Indian Pacific pass on its way from Sydney to Perth. It stops at Cook, a town of 4 people in the middle of nowhere, twice a week, on Fridays when coming from Sydney to Perth and on Mondays when heading from Perth to Sydney.

As it was Wednesday, we tentatively planned for being in Cook by next Thursday ready to meet the train on Friday.

We wanted to get to at least the top of Yorke Peninsula, so after Port Arthur and using WikiCamps as a guide, we stopped at the Port Arthur roadside rest area on the Clinton Conservation Park which has quite a few parking spots. There were only two other campers there and it was clean, quiet and convenient so as the sun was already setting we decided to stay.

What is great about the Vista RV camper is that you can stop at a site like this, just pop the back roof section up and get in. If there was a big storm, you wouldn’t even unhitch or put the roof up as you could get into bed, or sit at the table with the roof down. It’s one of the reasons we chose this camper. After a long day of final packing, it was good to hit the sack. Although it’s just off the Yorke Highway which many trucks use, we didn’t notice any road noise.

In the morning we went for a walk around the wetlands. On the Yorke Peninsula you can “Walk the Yorke” where several walks have been made so you can explore the region and wander through mangroves, dunes and along cliffs and pristine beaches. If you’ve never been here before, put it on your to-do list.

As we’re originally from South Australia, we’ve visited and camped on Yorke Peninsula a few times and there are awesome camps to stay at along the coast and in Innes National Park, as well as great caravan parks like Marion Bay and private bush camps at Hillocks Drive, Butler’s Beach. However the Yorke Peninsula Council has now declared that you can only camp at 19 designated campsites and that “Camping is only permitted at these designated sites”. The cost is $10 per vehicle per night with discounts for longer stays.

Why pay for campsites?

There are arguments for and against mandatory pay for campsites. Does the added cost of the council/shire setting up computer systems (websites, hosting, vendor fees etc.) and maintaining them to collect payments, extra administration costs, marketing (signs, brochures, websites) and paying rangers to police campers outweigh the costs being paid by campers? There are going to be campers that don’t pay the daily fees anyhow. Is policing the best way? Building and maintaining toilets and access roads costs money, but should this be funded by the camper?

Most campers do the right thing, even taking out more rubbish than they came in with and don’t spoil the environment or leave toilet paper everywhere. Yes, some do the wrong thing, but are the good ones paying the price for them? Is this whole governance model sending the wrong message to interstate and international visitors, stopping them visiting and bringing economic benefit to the Peninsula?

What about directing funds to educating people about how to camp responsibly and in an environmentally friendly way? It would be good to hear your views in the comments below.

Anyhow, jumping off the soap box, last year we found a great campsite at Wauraltee Beach and wanted to visit it again so that’s where we headed. From there we’ll head up the west coast of the peninsula and make our way to Cook, North-West of the town of Nullarbor. 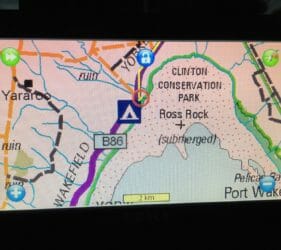 Hema map of our campsite 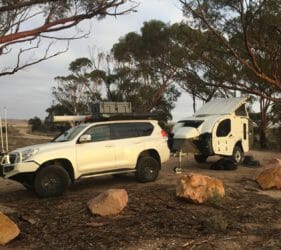 Peggy and Dora at the campsite 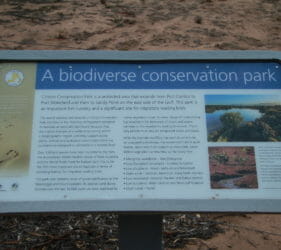 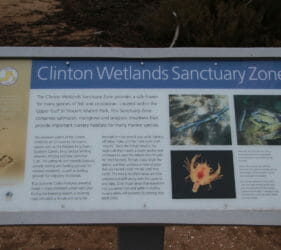 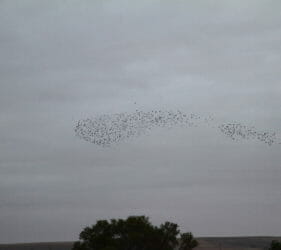 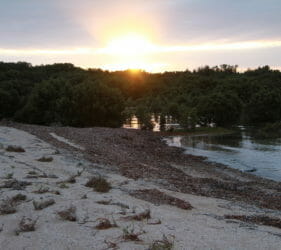