One door closes, just and a new one opens

Our dream of living full-time out of our camper has arrived!

The day has finally arrived. Today is the last day we spend in our home in Bendigo.

Tonight home will be wherever we park our trusty 4WD Toyota 2010 Prado, whom we call Peggy. This is the beginning of a new lifestyle of full-time camping and working around Australia. We’re not grey nomads but more like e-nomads, as we’ll be working from the camper where possible.

Our home is a Vista RV Crossover Classic who we haven’t officially named yet, but it will come to us. We’ve only had her (him?) since the start of the year and done a few trips to test her out. (Note: Jan 2018 – We’ve named her Dora, as Leonie’s father pointed out she was nicknamed Dusty Dora when she was young). We’ve taken her over to Southend and Yorke Peninsula in South Australia, and various campsites along the Murray River around Cohuna and Torrumbarry. She’s only three years old so hopefully has a few years left in her yet. Vic was told by one of the guys at Vista RV that she’ll outlive him. He’s not exactly sure what he was implying, but let’s assume he was saying she’ll last another 30-40 years!

Selling everything, cleaning up, it’s exhausting!

A long final day of cleaning the house ready for the new tenants goes on longer than planned but we get there. It’s been an exhausting last few weeks selling everything we don’t want (or need) to put in storage. From selling items on Gumtree, EBay, Facebook Bendigo, Buy, Swap and Sell and a huge garage sale, we’ve culled a lot of possessions that accumulate over the years for no good reason other than hoarding. It feels good, some would say cathartic to go through this process, not only of letting go, but preparing for a new lifestyle.

We finish packing both car and camper about 4:30pm and do a last minute rush into Bendigo to collect the mail and setup the post office box re-direction (which was meant to be done three days ago as Australia Post impose that lead time, so Vic will cop that one on the chin!). But it seems the paperwork will take us past 5pm, and the girl at Australia Post says the re-direction can be done at any Post Office and we can leave the keys there as well, so we decide to leave that.

We rush back home to say goodbye. We’ve been saving a couple of packets of Pīrāgi frozen in our ARB fridge since we sold our house fridge as well. Pīrāgi are Latvian yeast bacon, onion and caraway seed buns. They are highly sought after by our friends and relatives which take hours to make and minutes to demolish. After removing a packet of them from the slide drop down fridge at the back of Peggy we start talking with one of our neighbours then decide to go into his house and say goodbye to his wife.

Oops…that wasn’t in our plan!

Fifteen minutes later we return to the car to head off, reverse out of the driveway and hear a huge groaning sound like steel being bent out of shape! But there’s nothing behind me, except of course for an unclosed rear tail gate! It’s jackknifed into the camper and has lodged itself into and bent the right front guard of the camper a bit but Peggy has come off worse with a bent and dented tail gate with a broken strut that now doesn’t close properly.

The car is driven forward and straightened up so the door can be swung back away from the camper. The guard on the camper has to be pried away from the main body with a bit of force. Nothing is broken but slightly bent. Fortunately with a bit of lifting and pushing shut the tail gate does actually close, but just! No one injured but pride damaged more than anything.

Finally we get on the road

We say a final goodbye and have a beer with our other neighbours and before long it’s 6:30pm! We decide to head off to a free camp site we had earmarked just under an hour away. We’ve never been there before, it would be dark in just under two hours so it was time to get a move on. We found the site on WikiCamps and it seemed like a good overnight spot to have a beer and collapse for the night.

We headed to the Pines campground near Mt Camel in the Heathcote-Greytown National Park. It’s a scenic, pine scented open area with a picnic table under some giant Lord of the Ring intertwined pine trees and has room for several sites. We were the only campers there and it was very serene, apart from a few nagging mozzies. We awoke the next morning to a still, beautiful blue sky and the sound of Kookaburras, Whip birds (a favourite) and Magpies.

After a call to AAMI, we had the car booked in at one of their premium repairers in Carrum Downs, Melbourne for next Wednesday. It was just like one of those AAMI commercials. The operator said, “Where are you, I can hear kookaburras?”. After telling her our story we could see the AAMI girl coming to our rescue…Lucky…you’re with AAMI. Who said advertising doesn’t work?

So we decide to continue with our plans to head to the Victorian High Country for a few days, then return to Melbourne and stay with friends until the repair is done.

Lake William Hovell is our next destination, near Cheshunt in the Victorian High Country. It’s officially Day 1. Let’s put Day 0 behind us and move on! 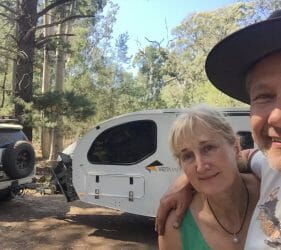 Leonie and Vic at The Pines Campground 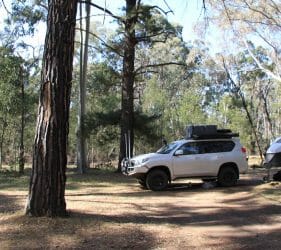 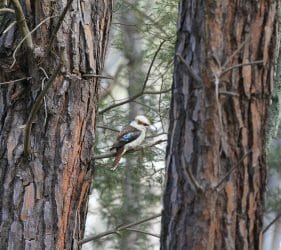 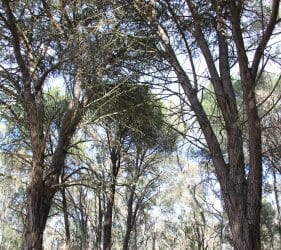 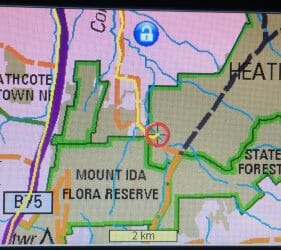 HEMA Map of The Pines Campground