The King River and Fishy Tales

Heading to the Victorian High Country, one of our favourite destinations!

Leaving the Pines campground near Mt Camel in the Heathcote-Greytown National Park, we decided to continue our intended journey around the Victorian High Country for a few days before returning to Melbourne so we could get the car into the repairer.

We drove back through Heathcote so we could set the post box re-direction in place and head off. We drove down the Northern Highway and turned left at Tooborac, within a stones throw from the Tooborac Brewery. Vic sighed that this would probably be the last time for quite a while that he’ll be here, one of his favourite breweries in the Bendigo region. If you’re ever up this way, stop in, as well as great craft beers, they also do a fantastic pub meal and are famous for their home made pies which you can also buy frozen for take away. The rabbit ramble being Vic’s favourite, and Leonie’s is the Lamb and Shiraz. Combine any of these with a Gunslingers American Pale Ale and you’re in for a real treat!

We’re in no rush

The road to the Hume Highway takes you past the Puckapunyal Army reserve. Sometimes army vehicles are seen but none on this trip. Despite 110Km/Hour being the limit on the highway, we sit on 100Km/Hour. There’s no rush, and this conserves fuel. 90 is even better, but then you’re constantly overtaken by cars and especially large semi’s, so we’d rather sit on 100. We’ve been using RoadTrip, a great iPhone app to keep a tally of our car mileage and expenses. Peggy (our Toyota Prado) is quite heavy with its steel ARB bull bar, roof rack and under carriage protection so we’ve only ever managed around 13L/100 without towing anything. The grey storage box on top which carries the chain saw and our battery powered coal BBQ rotisserie also adds considerable drag. We’ll need to really evaluate whether we need to carry that throughout WA, but a chain saw always comes in handy. Add the Vista and we’re getting around 17-18L/100. Not great, but we’ll keep tabs on it.

There’s a van selling fruit on the side of the Hume Highway, so we stop for a break and buy some blueberries and apples. We’re conscious we can’t stop at every bakery and eat bad, not only from a budget perspective but we’re keen to get fitter and eat healthier, one of our goals of this new lifestyle.

The King Valley is magnificent

We leave the highway at Glenrowan and head towards the High Country, a bit quicker and infinitely more comfortable than how the bushranger Ned Kelly would have travelled it by horse around the 1870’s.

The head to Lake William Hovell via the King Valley through towns like Moyhu, Whitfield and Cheshunt and it’s as we remember from previous trips, so scenic, green and lush, especially at this time of year. We’ve camped around the lake before, but in our Oztent. There are some great campsites only accessible via 4WD track at the end on the lake on Upper King River Road but we could not remember if the sites were beyond a particularly steep ascent. That’s no problem for just a 4WD vehicle, but we are towing our home around plus we have a broken tail gate and we didn’t want it to spring open up the hill. Our suspicions were confirmed, you do need to go up that track to access those sites, so we decide to head back and check out some of the tracks we saw coming up to the lake. We could also see there were several campers already in those sites, so it made the decision easier to move. Those sites are also accessible by going down Long Spur Track and crossing the river, but we’ve never done it that way and don’t know how rough the track is.

We stop at Long Spur Track and Vic walks down the track to see if we could get Peggy and the camper down and if anyone is camped down there. It’s quite a walk and relatively steep, but probably do-able with the camper. Unfortunately there are people camped at the base of the track, just before the King River where you can drive across, and then more campers on the other side. The woman at the camp says we’re welcome to stay and there was enough room for us, but we don’t like to intrude. Incidentally they had towed a Jayco van down there, so we should have no problems getting the Vista down. She gave us a tip that there are several spots down the road just near the Crismont winery, so we decide to head there.

We head back on Upper King River Road and turn right down Burrowes Road alongside some large sheds. There are quite a few campers at the first large campsite, right on the King River. It looks like a great spot but there are too many campers for our liking so we push on. We pass another small solitary campsite with a camper trailer setup and a woman reading in her deck chair. About 500m on there’s a small opening towards the river and what looks like an area for a camper trailer. Leonie gets out to have a look around. She gives the thumbs up, this will do nicely for a night, maybe two.

The river is accessible by a short walk about 40m through a narrow path in large thick bushes, but easy enough to walk through and emerges right on the King River, by a shallow section around 30cm deep, enough to collect water from and with great views up and down the river. The King River looks breathtaking. Down the river there are some rapids, but up the river it’s calmer and there seem to be deeper spots and looks appealing for fishing, always on our selection criteria for a great camp site. Grassy knolls and babbling brooks are others. Camping anywhere near rivers like this in the high country is always amazing. We are greeted by our favourite whip birds, and there are magpies, kookaburras and other tiny birds we think is a Yellow-rumped Pardalote (No, we’re not that good, we had to research it). They burrowed in holes near the base of a tree, in what looked like a dig out people had made. Vic managed to get a photo of one emerging from its hole. It looked as if they were building a nest as they were exiting, collecting small twigs and returning to their nest. The next day you could see the result of their diggings as they kicked the dirt out of their hole.

It was a perfectly still night with only the sound of frogs, running water and the occasional bark falling from the tall gum trees adjacent to our camp being heard. Sometimes you can be too close to a river and the babbling sound is quite deafening, but being a short distance from the river and having the bushes shielding us, the sound level was perfect.

We decided to stay two nights. The weather was ideal, blue skies, little to no wind and in the low 30’s. There are parts of the river deep enough so we enjoyed a refreshing swim.

Leonie went for a walk and found out that the small camp just up the road were a family from Wangaratta who come here often, as its only 45 minutes away and they were leaving Sunday. To see if we should move, we checked it out and discovered it’s closer to the river, with the sound of the river crossing the rapids much louder than our site, and has a steep embankment and rocky steps to get down to the water so we decide to stay put.

Time to get the rods out!

Vic went fishing by wading up the river to test out the deeper pools. The stones were very slippery walking through a small set of rapids but nothing was taking his fly, nor any of the three types of lures he tried.

Not to be beaten, on the morning of our last day there, the lure of landing a large brown trout on the King River was too great so he walked down the dusty winding road alongside giant elm trees (we think) to find a path to another section of the river which could be heard gurgling away in the distance. The undergrowth was reasonably thick from the dirt road to the river, and with the weather so warm he was wary of snakes so all the time banged a stick around him to warn any of his travels. Fortunately none were seen.

After about 200m of weaving around the thick lush spring grasses and bracken ferns, he emerged fairly unscathed apart from the usual minor cuts and scratches from blackberry bushes to discover a beautiful section of the King River flowing steadily over large pebbles causing small rapids then smoothing out to a deeper area and flowing past to another rapid section about 200m further down.

Who won, the fish or Vic?

Armed with his burgundy/red coloured floating and diving lure which looked like a caterpillar without legs from a Japanese monster film he flicked it about 5m into the middle of the river and gently reeled him in, working him up and down about half a metre. Closer to the bank it became much shallower and the lure scraped the river bed a few times. When the lure was just about to be brought ashore, an enormous splash surrounded his lure when a fish pounced but did not catch and the lure emerged unscathed! With senses heightened he quickly returned the monster lure to the same spot and repeated the actions. It was like rewind and playback, the exact strike happened again at about the same spot, and the lure came out of the water again with no fish attached! A third attempt proved fruitless, no doubt the monster fish got spooked and even after trying a multitude of different lures and spots and navigating up and down the river on slippery moss covered stones not a sign of another fish was seen! Trout 1, Vic 0, unfortunately a very common score.

Vic is looking forward to a rematch but it will have to be from another camp. We are moving camps to be closer to Melboume as we are staying with friends Tuesday night so we can bring our car in to get the tail gate fixed on Wednesday which could take anywhere from three to five days.

We decided to stay overnight on Lake Eildon, so we packed up camp and headed there. 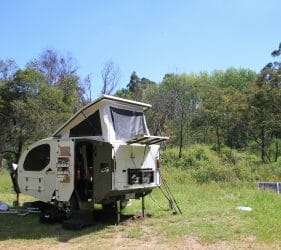 Our campsite on the King River, Cheshunt South 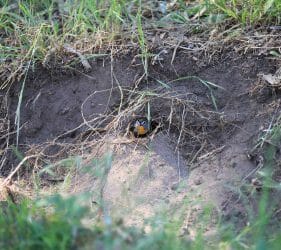 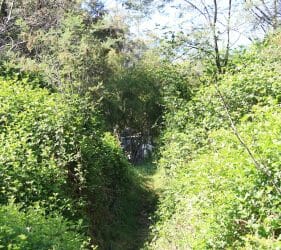 Path to the King River from our campsite 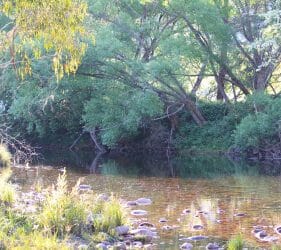 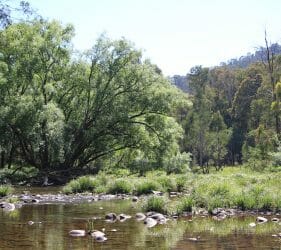 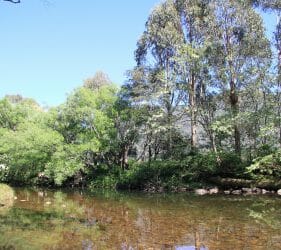 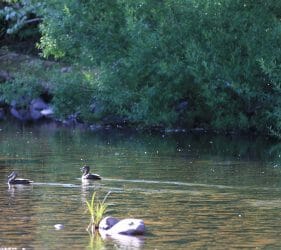 Ducks on the King River 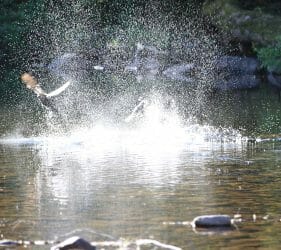 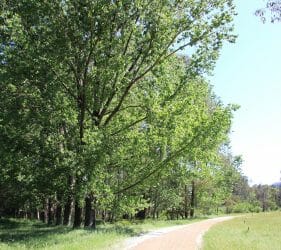 Looking back to our campsite along the Elm trees 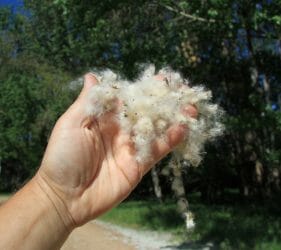 Blooms from the Elm Trees 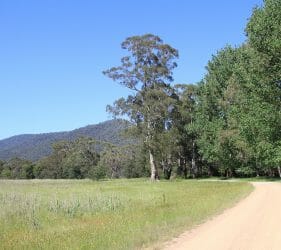 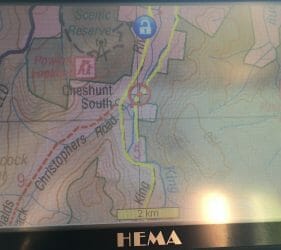