noun : any vehicle that has been left to die and rust under the elements

In our travels, we always shout out CARCASS whenever we see a dead vehicle lying by the road.

We’ll continue to add photos of carcasses here as we find them. If you have any, please email them to us along with your name, a brief description and the location and we’ll add them crediting you (or let us know if you want to stay anonymous) and we’ll build up a decent list. 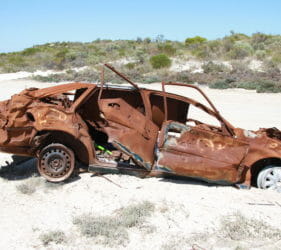 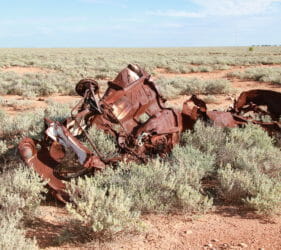 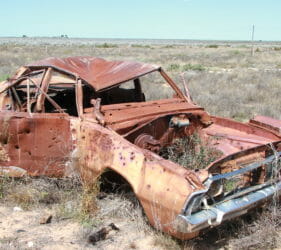 Port Arthur to Wauraltee to the Bamboos, Yorke Peninsula

We stopped at the IGA in Maitland for some supplies. Most importantly to buy Kangaroo mince and curry powder to make up some burley for catching fish and buying a sausage sizzle and Lions cake from the local Rotary club stall in front of the IGA. From there we headed down the Second Beach Road towards Wauraltee. Along Second Beach Road we stopped to take photos of a Carcasse. Not the type you’re probably thinking of. We use this term to denote any sort of vehicle that has been left to die and rust under the elements. We’ve started a blog here and we’ll keep adding Carcasses to it.

We arrived at Wauraltee Beach campsite and found no one else there. Brilliant! We headed down the track to the camp we found last year, but this time went one site further to the end. It’s slightly larger and there’s a turn around at the end. The sand is quite soft but not enough that you need to lower your tyre pressures.

The lure of this camp was the nice flathead Vic caught last year so off he went fishing using the made up burley and cockles we gathered in Middleton. The water was warm but tan stained yellow in colour, maybe due to the large amount of seaweed, but not really sure. Unfortunately no flathead but he caught four yellowtail whiting which tasted great filleted and cooked just in butter on the pan. This went down nicely with the Amber Ale home brew he made in Gumeracha.

We retired to bed early as the fire ban restriction is in place in South Australia until 30 April so unfortunately couldn’t have a fire, despite the temperature being in the mid teens so one would have been welcome. We didn’t expect a nice sunset as it was very overcast so were surprised that out of nowhere the sky turned a brilliant colour so we jumped out of the camper to take some great photos.

We woke to a beautiful still morning and cooked up a delicious breakfast of fried eggs and the last of the tasty Fritz we’ve been savouring from Gumeracha Gourmet butchers.

Vic went fishing, despite the tide being on low, but only got a few small bites. It was sad to leave this beautiful spot but we could only stay one night as we had organised to stay with friends in Port Victoria that night, so we packed up and headed off.

We stayed overnight in our camper at our friends Paul and Fiona and along with some of their friends that night, had a lovely meal of crabs, snook and whiting which Paul and his mates had caught that day from their boat. Oh, how Vic wishes he had a tinny with us!

On recommendation from the locals we met that night, we decided to investigate three campsites up the coast. We drove back via Maitland then on to Balgowan. A large stumpy tail lizard greeted us on the road so Vic took a photo and let him cross. The first site up the road was Tiparra Rocks but it was too windy and exposed and what looked like the best site down the end was occupied by a group of campers.

We drove past the Bamboos to the Gap and again found it was windy with limited sites out of the wind and very busy with lots of groups of campers so we headed back to the Bamboos. We don’t know why, perhaps because Tiparra and the Bamboos don’t have toilets, but no one else was there and we found a perfect spot shielded from the wind just behind a huge dune which led up and over to the sea. Some people arrived later to have a walk and two more cars from Kadina with friends from Roxby went fishing but found it too windy. They said they didn’t care as they don’t see water too often so it was more about the experience. What a great attitude! None of them stayed the night so we had the place to ourselves.

This campsite was perfect as there was a westerly wind blowing and the dunes shielded us nicely. We camped with the dunes near our door step, and could hear the roar of the waves pounding the shore over them. We love the sound of the sea, it’s so calming. If it’s really crashing, you can be too close as it’s deafening. We’ve also camped near fast running streams in the Victorian High Country that are so loud you need to move! Walking over the high, trodden free dunes you arrive at the top where you can see the waves crashing on the shore and magnificent views up and down the coast. We watched an awesome sunset from the top of the dunes and Vic drank his last Dainton beer left over from when we stayed at Kim and Leo’s.

The wind died and it was an overcast morning, fresh but no rain though some was predicted by the Willy Weather app. Birds were enjoying sips of water from the condensation off the camper and 4WD. We went for a small walk along the soft white sandy beach. An exposed approximately 6m cliff face of reddish limestone made for an interesting explore and of course, more photos!

We decided to head to Spear Creek Caravan Park, located 25 kilometres south-east of Port Augusta in an area called Woolundunga. We’d heard it was a good park and the WikiCamp reviews backed that up so off we went. 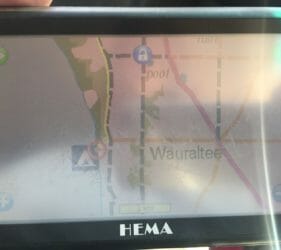 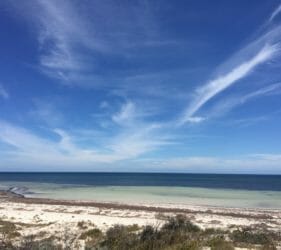 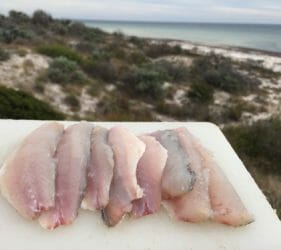 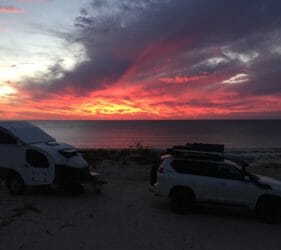 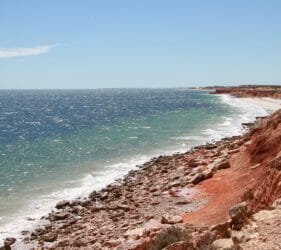 View along coast from Balgowan 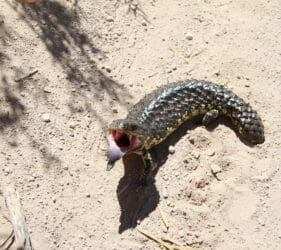 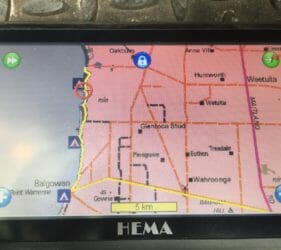 Hema map of the Bamboos campsite 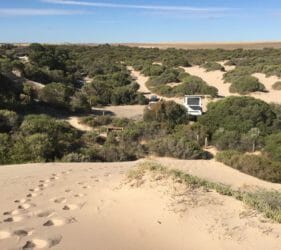 View back to our campsite from dunes at the Bamboos 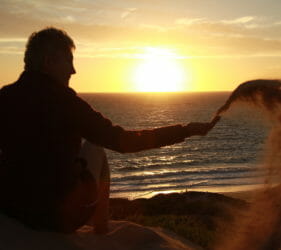 Leonie on the dunes at the Bamboos 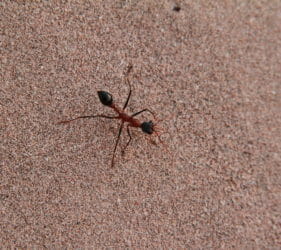 Inch ant on the hunt on the dunes at the Bamboos 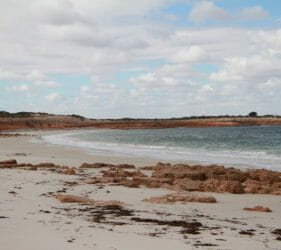 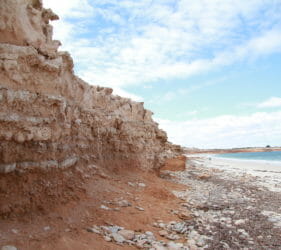 Red limestone cliffs along the coast at the Bamboos 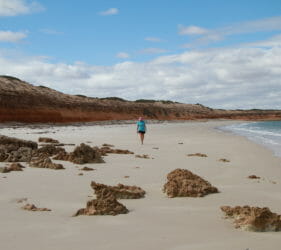 Leonie walking on the beach at the Bamboos 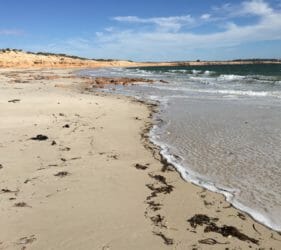 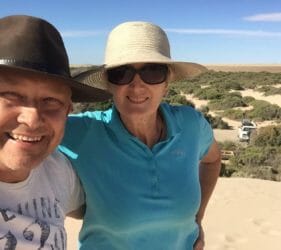 Vic and Leonie on the dunes at the Bamboos campsite 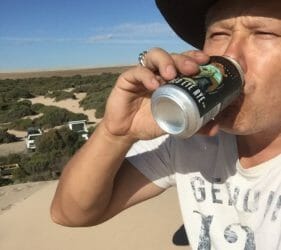 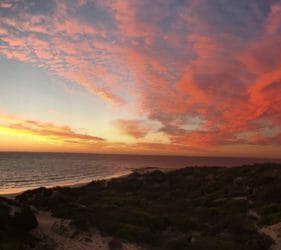 Sunset from the Bamboos campsite 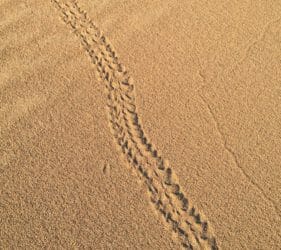 Interesting tracks made on the dunes at the Bamboos campsite (beetle or lizard?)
in blog 4 comments