From the SA/WA border to Afghan Rocks

We didn’t even know Afghan Rocks existed or where it was when we left the SA/WA border at Border Village. But we’ll get to that shortly. We didn’t refuel in Border Village or Eucla as we planned on filling up at the Mundrabilla Roadhouse. We knew from past experience it’s usually cheaper there than the Nullarbor Roadhouse, Border Village or Eucla. Passing through Eucla only 12 Kms down the road, it’s only 78 kms to the Mundrabilla Roadhouse. So we refuelled there, where it was $1.76/L compared to 1.87/L at Nullarbor. Fuel consumption was 15.85 L/100 km.

It’s a long drive then through Madura, Cocklebiddy then the long Caiguna straight, Australia’s longest straight road of 146.6 km/90 miles. About half way along the straight we saw a wild black and brown dog and were lucky enough to photograph it. He looked healthy enough, but we wondered what it would be like for him in the middle of summer. For the middle of March the plain was surprisingly green. 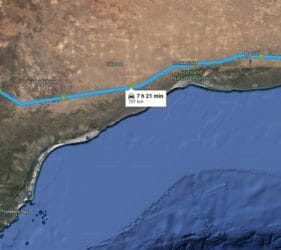 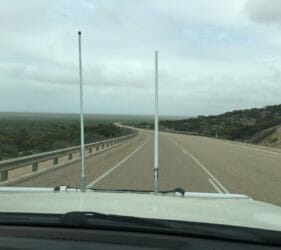 Heading west out of Eucla 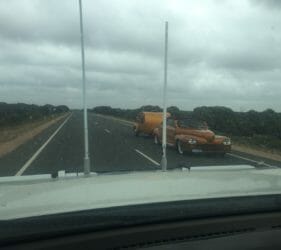 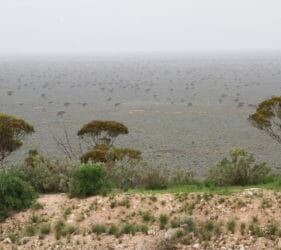 View from the top of the escarpment at Madura Pass 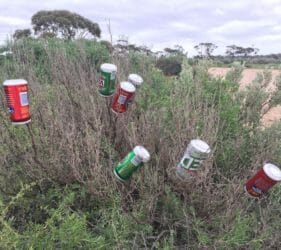 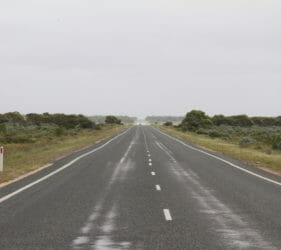 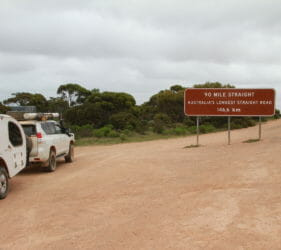 At Caiguna, about to head on Australia's longest straight road of 146.6 km/90 miles Wild dog on the Caiguna straight

We wanted to reach Newman Rock in the Fraser Range by nightfall, but it was getting dark. After checking Google and WikiCamps, we found reference to a place called Afghan Rocks, just before Balladonia. It can be a bit tricky to find. There’s a rest stop called Afghan Rocks in WikiCamps about 5Km east of the Balladonia Hotel Motel, but that’s not it. Just a few metres to the west of that rest stop there’s a dirt road heading north and about 50m (metres not kilometres) in there’s a gate.

It wasn’t locked but it was closed so we drove through and closed it behind us. The track could be quite slippery in the rain. We drove up the narrow track, which was only a little damp from recent rain and after about 2 km came to the most amazing rock formation. It was not very high, but made of undulating red and brown granite. Getting out of the car we were hit with a very distinctive sweet odour which turned out to be from the sandalwood trees around. Water had pooled in numerous places around the rocks and we stopped near a large dam with a few ducks. There was no one else around, apart from some cows mooing in the distance but they never came near. We went for a walk and had this most beautiful place all to ourselves. 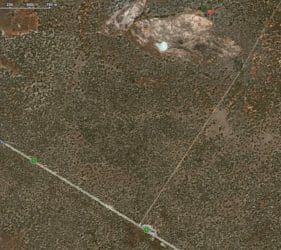 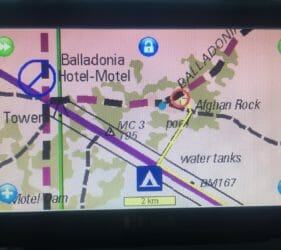 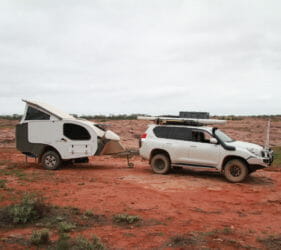 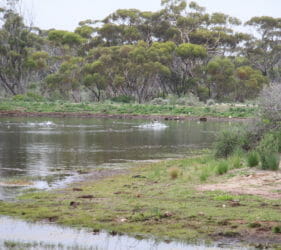 Ducks in the dam at Afghan Rocks 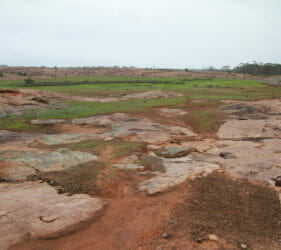 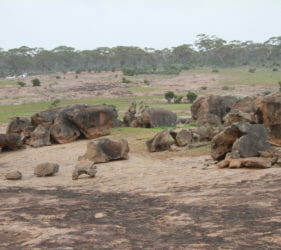 Afghan Rocks. Our camp is in the distance. 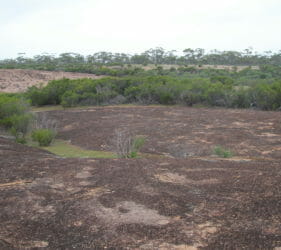 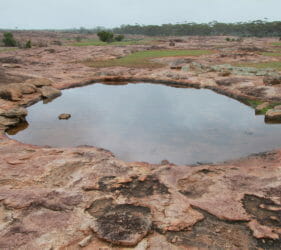 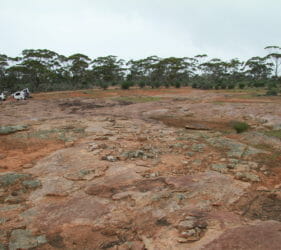 We stayed overnight and headed back the way we came to the Eyre Highway, then headed to the Balladonia Hotel Motel.

Balladonia is best known for the final resting place of Skylab, a NASA space station that came crashing down to earth on 13 July, 1979 with bits of it scattering over a wide area from Esperance to Balladonia to Rawlinna. The Shire of Esperance fined NASA AUD$400 for littering. The fine was paid in April 2009, when radio show host Scott Barley of Highway Radio raised the funds from his morning show listeners on behalf of NASA.

Don’t just refuel and head off. Inside the roadhouse there’s a museum. Spend some time and have a good look through. It has all sorts of interesting information about the history of the area, Skylab, the Redex trials and sandalwood trees. There’s also a poem by Dame Mary Durack, Australian author and historian, born in Adelaide in 1913 written in response to the Skylab crash called Skylab Speaking:

Balladonia here I come,
far from where I started from
Travelling ever speedier
to avoid the media

I’ve picked out an empty space,
where I see no human face
Simple scientific me
I abhor publicity

We also learnt more about the rock camp we stayed at.

Afghans and their camels played a vital role in early Australian outback life. The cameleers came originally from Karachi or outlying Baluchistan in north western India. Camels were the mainstay of heavy transport for Balladonia and surrounding stations until development of the Eyre Highway in 1942.

Known as “The incident at Afghan Rock”, it occurred at the very site we were camped. Taken from a poster at the museum is this account of it: “A European goods carter misinterpreted the actions of Afghan camel drivers engaged in a religious rite involving the washing of their feet in the rock pool. A hostile argument developed, during which one of the Afghans was shot and killed. The European went on trial in Albany, but was acquitted of murder on the grounds that extreme scarcity of water in the region meant that defilement of a water supply threatened life. The fact that the water in that instance was already sullied by the carcass of a dead camel did not seem to sway the jury’s decision”. 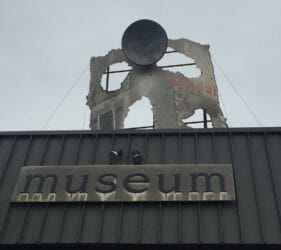 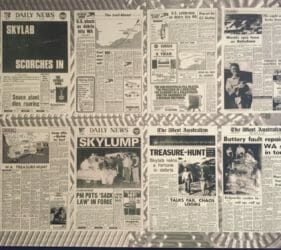 Poster of Skylab fall at the Balladonia Hotel Motel 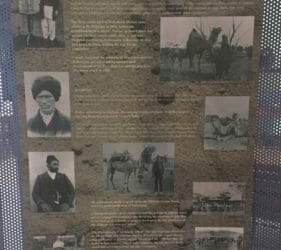 Poster of Afghans and Camels at the Balladonia Hotel Motel 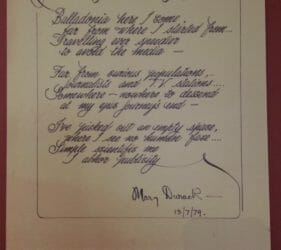 What people do for a good coffee!

Refuelling at Balladonia we met a couple from Falls Creek in Victoria. We had seen them also looking for a place to stop before we discovered Afghan Rocks. They ended up staying just off the Eyre Highway. It was a cold morning, around 18C, if that can be classified as cold! Despite being from Falls Creek where it snows in the winter, they said it was too cold and they’re heading north to the Goldfields. They had stayed at Eucla the night before but in the morning drove back over the border to Border Village in South Australia. They said the coffee was so good there it was worth crossing the border again and coming back through the quarantine station again much to the inspectors surprise.

We stopped at Newman Rock in the Fraser Range about 50 km north west of the Balladonia Hotel Motel. The landscape and vegetation was quite similar to Afghan Rocks, with a view over the surrounding area. But it’s not as hard to find or get to, and there was some mystique missing about it that we felt Afghan Rocks had. We stopped and took some photos, but felt glad we had stopped and took a chance at finding Afghan Rocks, especially after reading all about its history at the Balladonia Hotel Motel museum.

Finally at Norseman. Do we head to Perth or Esperance?

Continuing on to Norseman, we stopped to take some photos of one of the many salt lakes near the road. We filled up at the BP at Norseman for $1.51/L. It was 633 km from our last refuel at Mundrabilla and we averaged 15L/100km.

Norseman is like a crossroads when you get to it from the East. Do you head north west for Perth, or south towards Esperance and over to the mighty south west of Western Australia? We’ve been here several times before heading for Albany so we know that way the best. Our dilemma this time was we’d heard from a friend of ours that we might have some work in Perth on a project they were involved with. That would be nice we thought, we hadn’t worked much since leaving Bendigo back in November. But it’s still up in the air and was only for a week or two. We had planned to head off mid April anyhow for a 4 week trip to Exmouth and back with friends who were driving over from Adelaide. But it was only mid March. Leonie’s two sisters live in Albany and Kendenup so we decided to head there. 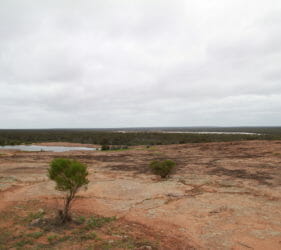 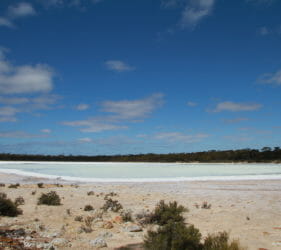